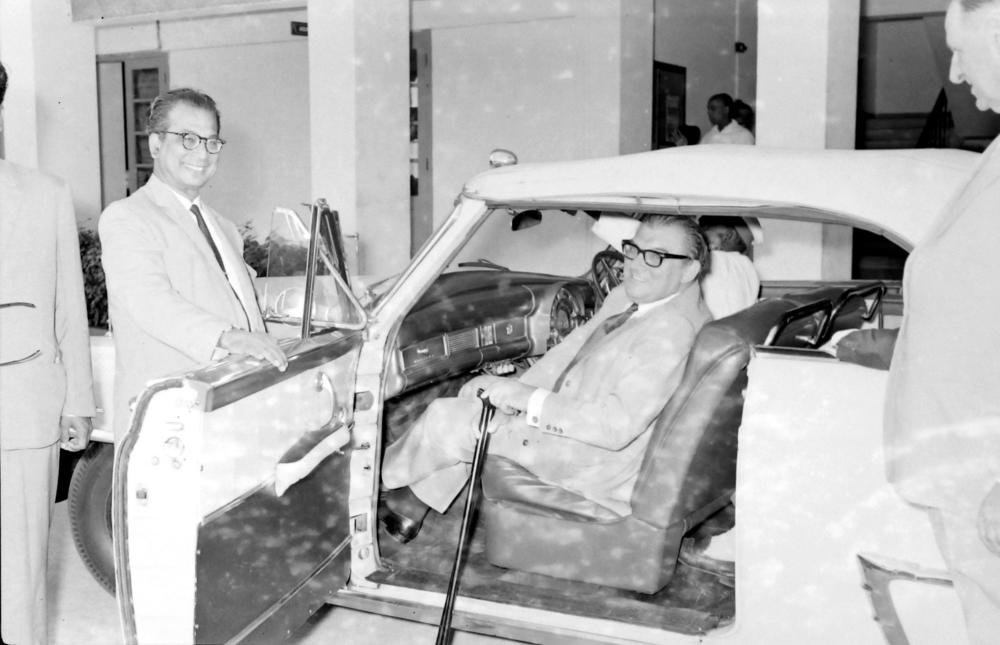 Mr. Hans Lenz (seated in the front of the car) and Prof. B. Sengupto (standing) outside the Building Sciences Block

On 30th January, 1964 Mr. Hans Lenz (Minister for Scientific Research, Federal Republic of Germany, Bonn) visited IIT Madras. A high tea ceremony was thrown in honour of his visit to the campus. Mr. Hans Lenz was received in front of the Building Sciences Block by Prof. Sengupto (Director) and other administration officials of the Institution. In the image, Mr. Hans Lenz (seated in the front of the car) arrives at the IIT Madras campus. It is very possible that he was suffering a walking impairment due to the two walking sticks that can be seen in the car near him. Furthermore a photograph taken on December 13th, 1962 when he was appointed as Minister of Research shows him using the assistance of two walking sticks. This image can be found on Wikipedia. Hence, it is quite possible that he had to be received in this manner.

Seen in the image from left to right: Prof. B. Sengupto (Director), Mr. Hans Lenz and Prof. R. A. Kraus (Adviser to the Government of India for IIT Madras).

Collection:
Gourishankar Collection
Album Name:
Visit of Mr. Hans Lenz
Photograph ID:
001/0209/IMG_0824
Album ID:
0209
Date:
30 January 1964
Place:
Bose-Einstein guesthouse (possibly)
Photographer:
C. Gourishankar (1926-2002). A geologist by qualification, Gourishankar started his career as a photographer after working for many years with the Geological Survey of India. In everything that he did, Gourishankar strove to achieve flawlessness and impeccable quality. Thus his photography too was characterised by this drive for perfection. Every photograph that Gourishankar took was meticulously planned and shot and printed with diligence and patience. Gourishankar carried out most of the official photography at IIT Madras in the 1960s.
Event:
VIP Visit
Share: