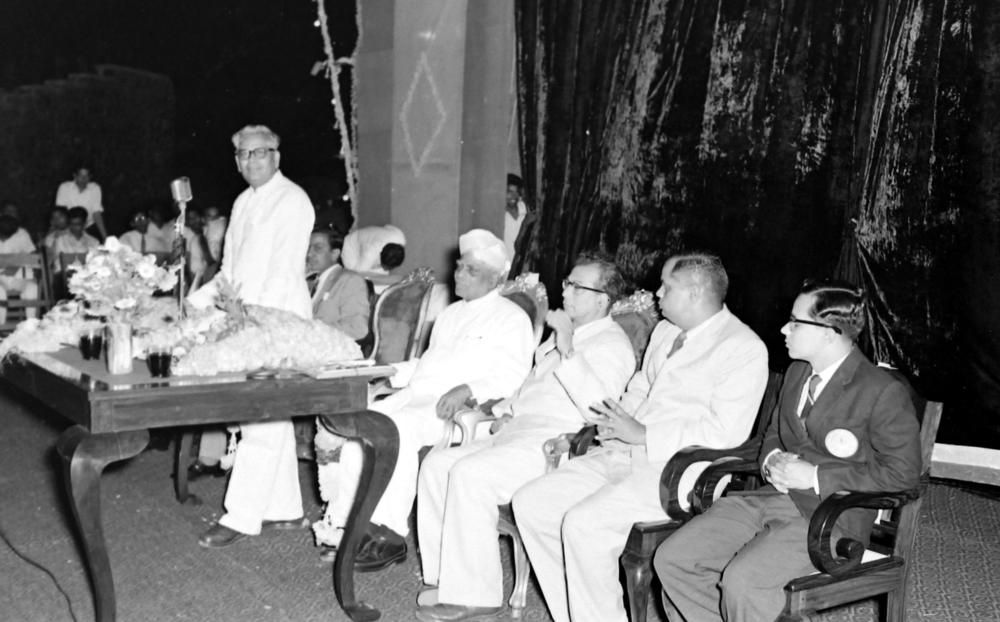 The chief guest, Mr. Ramaswamy Venkataraman was the Minister of Industries for the Government of Madras during this time. He would go on to serve as the eighth President of India from 1987 to 1992.

The Student Secretary P. Ananda Bhat was a student of Chemical Engineering who hailed from Karkala, Karnataka. According to the Annual Number of 1963-64, he played most games and collected stamps as a hobby.

Collection:
Gourishankar Collection
Album Name:
Fifth Institute Day, 1964
Photograph ID:
001/0283/IMG_0810
Album ID:
0283
Date:
1 April 1964
Place:
Open Air Theatre (OAT)
Photographer:
C. Gourishankar (1936-2002). A geologist by qualification, Gourishankar started his career as a photographer after working for many years with the Geological Survey of India. In everything that he did, Gourishankar strove to achieve flawlessness and impeccable quality. Thus his photography too was characterised by this drive for perfection. Every photograph that Gourishankar took was meticulously planned and shot and printed with diligence and patience. Gourishankar carried out most of the official photography at IIT Madras in the 1960s.
Event:
Fifth Institute Day
Share: