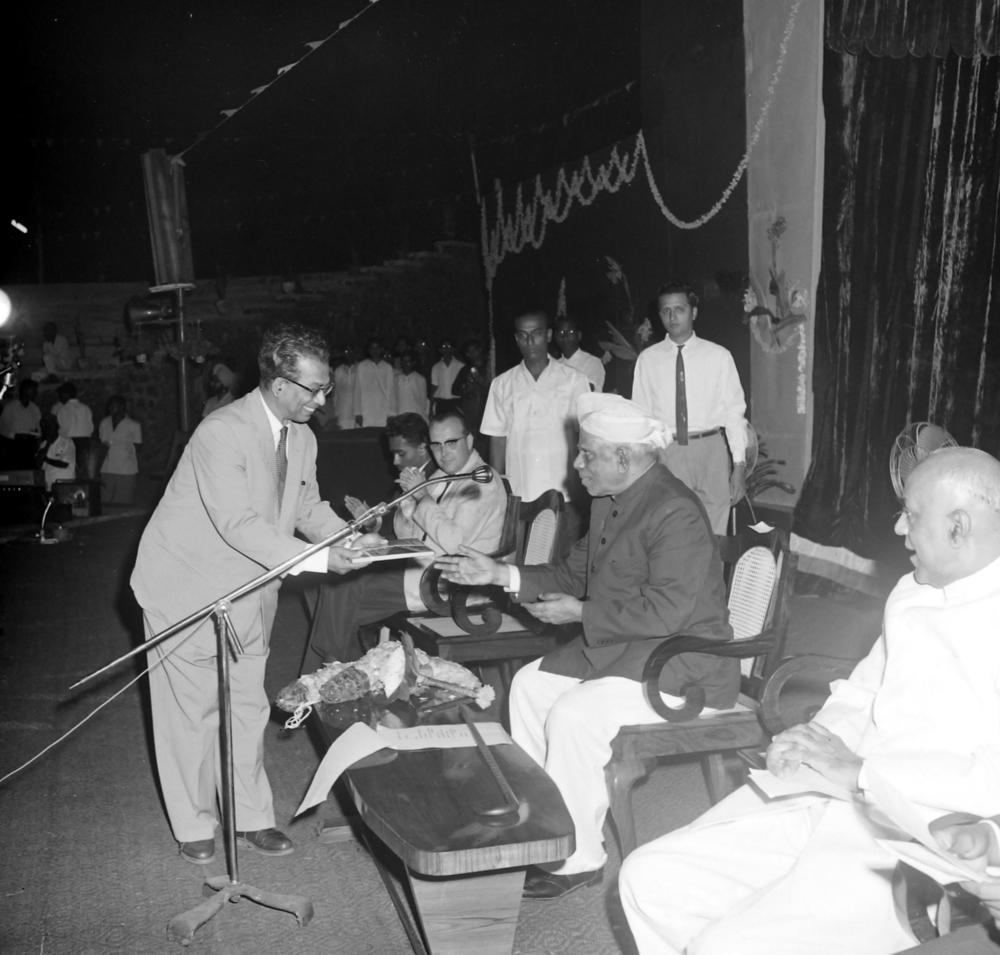 This photograph was taken during the Seventh Institute Day. The Annual Number “Institute Magazine” was released on Institute Days in the 1960s. It contained poems, articles and photographs contributed by the IIT Madras students, staff and faculty. They also provided reports from departments, the Gymkhana and other organisations from the Institute.

Prof. B. Sengupto (extreme left) was the first Director of IIT Madras (1959 to 1967) while Dr. A. L. Mudaliar (wearing a turban) was the first Chairman of the Institute (1959 to 1969). To the extreme right, we can see Dr. Raja Sir Muthiah Chettiar (Pro-Chancellor, Annamalai University and Member, Board of Governors).

Dr. N. Klein (staff-in-charge of the Literary Committee, behind the microphone) is also seated on the stage.

Standing, Mr. Srinivasan (Physical Training Instructor, on the left) and Mr. Dubey (Secretary to Registrar, on the right).

An identical photograph can be found in the Central Photographic Section Collection in Album 0017 under the ID: 001/0017/IMG_0602_1

Collection:
Gourishankar Collection
Album Name:
Seventh Institute Day, 1966
Photograph ID:
001/0206/IMG_0144
Album ID:
0206
Date:
12 March 1966
Place:
Open Air Theatre (OAT)
Photographer:
C. Gourishankar (1936-2002). A geologist by qualification, Gourishankar started his career as a photographer after working for many years with the Geological Survey of India. In everything that he did, Gourishankar strove to achieve flawlessness and impeccable quality. Thus his photography too was characterised by this drive for perfection. Every photograph that Gourishankar took was meticulously planned and shot and printed with diligence and patience. Gourishankar carried out most of the official photography at IIT Madras in the 1960s.
Event:
Seventh Institute Day
Share: